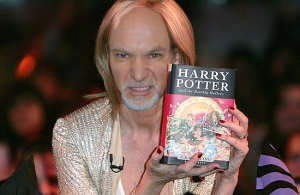 As if we needed further confirmation, we now have undeniable proof that I am not J.K. Rowling or in any way related to her.  On more than one occasion, I have received emails that have started with Dear R.W. Rowling.

The actual literary Rowling confirmed this week that she has published a book under the pen name, Robert Gailbraith.  Sales for the book written under her nom de plume, The Cuckoo’s Calling, soared an astonishing 507,000% shortly after her announcement.

Recently, I made a similar announcement on this blog that I too published under a pseudonym.  Sales did not increase 507,000%.  They went up about 300%, but I have a feeling we are talking even more dramatically different actual sales numbers.  She can buy an island with her 507,000%.  I can maybe buy a “J.K. Rowling bought an island and all I got was this lousy t-shirt” t-shirt with my 300%.

So congratulations, J.K. Rowling!  You win! Again!  You couldn’t even let me have this one thing, could you?

BTW – I feel compelled to say that the snarkitude of this post is all in good fun.  I truly do admire Rowling and appreciate everything she’s done for publishing.  Let’s face it, she made reading cool to an entire generation.