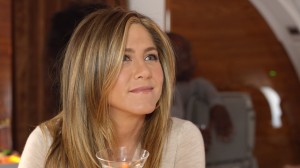 No one wants to see Jennifer Aniston die at the end.

All this talk in the news of a Friends reunion reminds me of an experience I had at a reading of an early version of One Bear Lake. This was a few months ago, and I had reworked the opening scene into a 10-minute play format.  After the reading, I was approached by a man who identified himself as an agent. My ears perked up because I assumed he meant theatrical agent since we were at a playwright’s workshop. I have a literary agent that represents my work in the world of publishing and film, and I have no interest in changing horses midstream, but theater is a different stream, so I was very interested in hearing what he had to say.

Well, it became apparent very early in the conversation that he represented screenwriters, and while I was flattered that he would approach me, I tried to look for an opening in his pitch to tell him I wasn’t interested. I didn’t want to waste his time. Just as I was about to engage thrusters and get out of the conversation he said two words that intrigued me. He said Jennifer Aniston.  Now I had to hear him out. For one simple reason. He had just dropped a major name, and I sensed this man was about to give me some excellent material I could one day write about.  Here is the gist of that conversation:

AGENT: Hi. I just wanted to tell you I really loved your piece.

AGENT: Let me ask you, does the lead have to die?

ME: Well, she doesn’t actually die –

AGENT: The reason I ask is because I’m an agent. (Hands me his card)

ME: Oh, you work with playwrights?

AGENT: (Ignores my question) Like I said, I loved your play. I just – I’m concerned about the lead dying.

AGENT: That is a hard sell if you want to get an A-List actress to play the role. Does she have to die?

AGENT: And I’m little concerned that she has cancer. You’re going to have to show her going through chemo, and it’s just going to be very hard for the audience to take.

ME: The entire play just covers a few days. You don’t actually see any of the treatments –

AGENT: The lead will have to lose weight over the course of filming to make it realistic.

ME: Filming? I don’t understand. Do you work in theater?

AGENT: No, no, no – I represent screenwriters.

AGENT: I think this would be perfect for Jennifer.

AGENT: Aniston. I could really see her doing the lead. She’d be perfect. The audience wouldn’t want to see her die though. She can’t die at the end.

ME: As I said, she doesn’t die – That is to say the character doesn’t –

AGENT: And no one wants to see Jennifer Aniston look sickly and going through chemo.

ME: No, no one wants to see Jennifer Aniston go through chemo I agree. That would be horrible. But if it was just a part she was playing – A character – But beyond that issue, no one dies from cancer or goes through chemo in my play –

AGENT: Do you have more than what I saw here tonight?

ME: I’ve got a second scene. I’m planning on making a full-length version –

AGENT: Good. Send it to me when you’re done, and I’ll get it to Jennifer’s people. Remember, rethink the cancer. Or if you have to give her cancer, make sure she gets cured at the end. No one wants to see Jennifer Aniston die. (Walks away).

ME: She doesn’t die. – I mean the lead character doesn’t die at the end – the play only covers a couple of days. This isn’t – No one goes through – You understand this is a stage play, right?

The agent walks out of earshot.

BTW – I should clarify that he never claimed to know Jennifer Aniston. He was just confidant he could get the material to her people.