Here it is.  The radio interview you’ve been wating for.  Listen to me talk about Bigfoot, Oz, fantasy football; I cover it all.

Okay, not really, but Scott Vaughn (friend to this blog, Taker Supporter, and radio personality extraordinaire) is doing an exceptional job of spreading the word about the Takers, and it is perfect timing.  He wrote “Beware the Takers” on a genuine US dollar bill, and placed it on a wall at restaurant in Florida.  Here’s the email he sent with the pictures:

The family and I went to Carillon Beach, near Panama City Beach last week. We ventured over to Destin and ate at McGuire’s Pub and Steakhouse. The place is covered with “signed” dollar bills. Soooooo we left a Taker’s bill stapled to the railing.

Way to go Scott!  His self-motivated marketing efforts have moved me to start a new competition centered around either the Oz Chronicles’ books or Lost Days.  I haven’t worked out the particulars, and I won’t be giving away a Kindle again, but it will be of equal or greater value.  Stay tuned.  The new contest is coming. 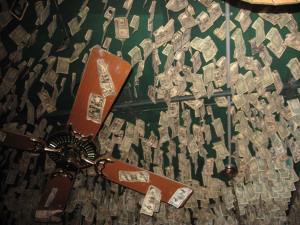 The wall of moneys